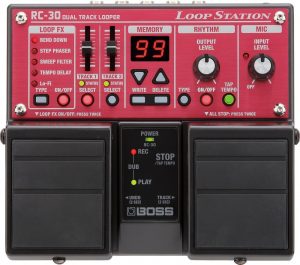 Effects pedals are nothing new, and are the subject of some debate among musicians as everyone likes to search for their own sound. Looper pedals are relatively new, and not something you’ll see used in performances from 30 or 40 years ago, where people were satisfied with distortion, overdrive and reverb pedals. There’s no doubt that music technology has come an awful long way in recent years, and many musicians have invested in a great quality looper pedal to aid their performances, and they’ve been used in some truly stunning ways, to great effect by everyone from vocalists to guitarists and more.

Benefits and Uses of Looper Pedals

The benefits of using a looper pedal are multiple, and some are more obvious than others, but the below list of uses might sway your decision and what you plan to use your brand new pedal for.

A looper pedal will take a section of music and loop it as per your preference. This means you can play a few chords, even create a rhythm or bassline before looping it and building over the top of it with more and more layers, much like you had a whole band there with you.

When you say ‘looper pedal’ to a lot of musicians, this is the first pedal they will think of. It is pretty iconic in the world of looping, but that doesn’t by default make it the best pedal for the job. Boss are a prolific and wide reaching brand who make such a huge amount of audio equipment.

The RC-1 is a clever looper pedal which is extremely compact, not something you can say for some of its competitors. It doesn’t have a lot of dials and buttons, and this means that though it doesn’t have all of the features some pedals offer, it does have the benefit of being easy to control and can all be done with tapping and holding the pedal. It has a total of 12 minutes recording time in stereo which allows you to do a lot for performance and practice.

There is an indicator on the top right which helps you to know what is going on, it will flash red when you’re recording, green during playback and both red and green if you’re overdubbing. An undo and redo function means that when you inevitably make a mistake you can quickly scrub it out without having to start all over again.

It doesn’t come with a power supply built in so this is something you may wish to invest in, and the memory slots don’t really lend themselves to recording numerous ideas and calling them back at a later date as it just has the one memory slot. This isn’t the biggest criticism and for many of us, the RC-1 is perfect. It is far from being the most expensive model so is great for those getting started with looping, and though its bigger brothers and sisters (other loop pedals also made by Boss) it is a small model which is great for simple and intuitive use.

If the RC-1 is the starter, this is the main course (and some). An incredible model of looper station, you will of course pay a premium for all of its features, and that may be overkill for some of us, but in all honesty, it is one of the most incredible options out there for anyone who has any need for looping.

The internal memory of the RC-30 is the best place to start, its predecessor had 16 minutes, and the above mentioned model has 12, but the RC-30 has an incredible 3 hours recording time in 99 recording slots which can be recalled at a future date for performance and practice.

The inputs and outputs are another incredible feature of this loop station. It has so much included. You can input a microphone with an XLR lead, and you can even use phantom power for a condenser mic. A USB lead means you can import and export to the Boss RC-30, take your favorite drum loops and other jamming backing tracks and put them onto your pedal, or take what you’ve recorded on the pedal and export it to your computer for future use in a track or as a demo.

Tap tempo and a count in mode make staying in time easier than ever, and as with most models in their range, the RC-30 is so easy to undo, redo and record onto. The use couldn’t be much simpler.

It also has built in effects, and though these are decent and things like a tempo delay can be really helpful, Boss have tried to be a little quirky with what is included here, sweep filters and degrade features are not something you’d usually use on a regular basis but can add something interesting. I think the main thing Boss have considered here is that many people are using reverb, delay and distortion pedals already, and that they don’t really need them on their device.

As mentioned above, this could be overkill. If you don’t need to recall tracks or have a lot of memory, you may get away with one of the cheapest looper pedals, of which this is not one! If you want all of the features and some cool, reliable additions, the RC-30 is an amazing option which comes with our recommendation. Including XLR input and USB port have made this even more exciting and increased the capabilities of what you can do with your importing and exporting, and adds another dimension to performing with your pedal. A quick look at our RC-30 review or any of the other reviews online will show you that most people have looked at this product very favorably, and searching on youtube will show you some incredible videos of the pedal in use.

In terms of price, this is somewhere in the middle of the other two models mentioned, but offers some very cool features including a true bypass, something which currently can’t be said of the Boss models. This is designed to be used by guitarists, and you can really tell from the features.

Firstly, dual looping is always great and allows so much more for you to do. You can put so many layers together and build a full track on the X4. You can, for instance, run a drum loop through the first and then layer up your guitar on the second looper, meaning you can build incredible musical textures. This model even has midi ins and outs, which is great if you’re using a backing track.

This is another looper with built in effects, but they’re a bit more mainstream than on the boss. Fade, reverse, tape stop and more can add something really interesting to your looping. Of course, you can still use these in tandem with a distortion pedal or other effects in your pedalboard. The Star Jam feature of the X4 also adds the option to import loops from other musicians.

This is a well built pedal and though it perhaps doesn’t have quite the same features as the RC-30, it is up there, and can do a lot more than the cheaper versions of loop pedals on the market. A quick look at the reviews on Amazon or elsewhere will show you a lot of favorable reviews and people who have enjoyed using the X4. There is also an X2 model and just the standard TC Ditto. Its siblings are more affordable and though there’s the compromise of a few less features they may be an option also. TC electronics are a fast growing brand who have some very impressive pedals, and this is certainly one of them.

I wanted to include a model from Digitech on our list of the best too. This is similar in some ways to the RC-1, it is compact and is cheaper than some of the other options available. Digitech offer a lot of different guitar pedals, and they tend to be very well made and well reviewed. This is no different, with most people reporting that it is simple to use and its features offer something new to their playing.

Narrowing Down the Top Pedals for Looping and Live Looping

It almost goes without saying that the best loop pedal for one person may not be the best for someone else. As you can see from the reviews above, there are a lot of differences between the models currently available as some include effects, some can record in multiple slots and some just record one set of loops to be played at the same time. Unfortunately, price is going to be a big consideration here for a lot of us, and for the best models you can expect to part with good money. That said, there are some good looper pedals under $100 or under $200 if you have a bit of a larger budget which can offer a lot to solo performers or bands.

Once you have used a looper pedal, it is unlikely you’ll want to be without one again. Even if you never use it for live performances and simply use it to perfect your solos, compose new tracks or work on staying tight and in time, most musicians can find a lot of use for looping, and with the advancements in the technology behind guitar pedals, it is easy to see why. Fortunately, all of the models we’ve mentioned in this model are, in our opinion, excellently constructed and reliably made, it is just a case of deciding which is the best for you!