Blue Microphones are real trailblazers for USB mic technology. The first brand to properly embrace and develop the technology to great effect.

It is natural that many people are looking for accessories, and in this post, we’re looking at the best mic stands for blue yeti microphones. The Blue Yeti is one of the most popular USB microphones and has become a staple for podcasters and musicians due to its great audio quality and simple plug-and-play technology.

You don’t need me to talk you through the merits of the Blue Yeti, as most reading this article will already be familiar with the microphone. So, time to focus on the accessories and look at how you can mount your Yeti on a stand.

In a hurry? Head straight to our recommended Blue Yeti floor stand below. 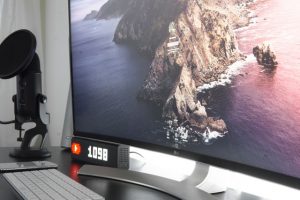 The Blue Yeti already comes with a stand, it’s true. So do many of the other Blue Mics. However, this is a desktop stand and it can be quite restrictive for a few different reasons. It means that you can’t easily move it during recording, especially if you want to keep the audio clear and avoid the sound of you moving your stand around.

Also, many people find that a desk stand is not the most comfortable way of doing things. It might be great if you want to put it on your coffee table while you play guitar into it, but if you’re recording at a desk and want the clearest audio you may find yourself having to hunch down and speak into it awkwardly.

Best Floor Stands for Blue Yeti (and Other Blue Mics)

A floor stand is, as you might expect, one that would stand on the floor! This has a large design, usually up to 6ft and above, and is the sort of stand you’d associate with someone recording vocals in the studio. If you want a mic stand for your Yeti to use when you are standing, it’s a floor stand you’ll want.

This mic stand does a brilliant, flexible job. It has a USA standard adaptor and threading, which means you can use it with a Blue Yeti mic.

On top of that, it has a “boom-style” mount stand at the top. This provides suspension and an extended arm so you can position at whatever angle you want. This is good for recording vocals but also for just about anything else, you can even mic up a guitar amp with this stand.

The mic stand comes with a shock mount so even if the stand is nudged it shouldn’t pick up on your recording.

Setup is quick and easy, and getting your microphone mounted on the Pyle stand takes just seconds once you know what you are doing. There’s even an integrated pop filter!

This microphone stand for Yeti is a little bit more expensive than some of the boom and desk stands found below, but for studio or broadcast use, this is a great option. Plus, it isn’t totally specific to the Blue microphone range which means you can use it with other microphones when needed.

An affordable floor stand you know you can rely on, this AmazonBasics tripod is fantastic for those who don’t want to spend too much to get a brilliant and reliable stand.

You can buy this with all sorts of different clips, but the unusual size and shape of the Blue Yeti means it works best with a shock mount. We’ve recommended some shock mounts below.

It’s got a plastic counterweight and lets you adjust the horizontal placement easily, so you can mic up an instrument, multiple band members or whatever else you want.

The sturdy construction, made of steel, means that you can use mics that weigh up to 1KG. That’s plenty for most people’s needs. If you do use a heaver mic, it might be a good idea to use a sandbag or something else heavy in order to weigh down the stand and provide balance.

Check the Current Price of The AmazonBasics Stand

A Boom Arm is what many will be looking for once the Shock Mount is sorted. It is a good option for many recording studio setups, especially home studios, but it is especially good for podcasting, voiceovers, gaming, and other uses where you are sat at a desk or looking at a screen in front.

Any of the boom arms we mention are an absolutely huge upgrade on the stand that comes with the Blue microphone. We have chosen different price points for the boom, as most can be bought under $100 but there is an element of ‘you get what you pay for’ with these stands.

RODE is a brand that is one of the best known in the microphone industry. Their PSA1 boom arm is one of the sturdiest and easiest to use Boom Arms you could ever wish for.

It was originally designed for the RODE Podcaster microphone, but you can use it for pretty much any chunky microphone, including the Yeti. It has two different options for mounting on your desk and is simple to set up and get going.

We think this is one of the best for flexibility and durability. The PSA1 Swivel Mount can be seen on a lot of YouTubers’ channels which is a big vote of confidence, but it does come at a cost, and there are cheaper stands and boom arms that can do a good job.

“InnoGear” is not a brand that is prolific in the music industry. That said, they offer some decent alternatives to more expensive competitors, and their Studio Arm mic stand is half the price of some of its competitors, with a lot of quality built-in.

It clamps to the bottom of a desk or table and has similar flexibility to the PSA1. It claims to be able to handle mics up to around 1.5kg in weight, which is more than enough for a Blue Yeti.

This microphone can also be used with the Blue Snowball, Blue Yeti Nano, and Blue Yeti X.

The package also includes some extras such as an adaptor for differently threaded microphones and even some foam covers. It isn’t quite as hefty and doesn’t feel as well made as the PSA1, but considering the price it will do a good enough job for many of us.

Check Current Price of the InnoGear

Shock Mounts are probably the most popular way of putting this particular microphone on a stand or on a ‘boom arm’. Due to the chunky size and nature of the microphone, it is a simpler and sturdier solution than a mic clip such as you might see used for a small vocal microphone. This Q and A post from Sound on Sound explains why you might need a shock mount.

There are some shock mounts made specifically for the Blue Yeti, but there are many that will fit it perfectly and you don’t have to spend a lot of money to get a mount that works well.

etting a product designed specifically with your microphone in mind has some benefits, and the Auphonix shock mount is a really great option.

As well as perfectly fitting the microphone, this stand serves to avoid any sounds from jolts, knocks, and bangs, these will definitely be an issue if you are using a desktop stand. This is probably designed with ‘boom arms’ in mind, and easily attaches to arm-style stands, but can be used to mount onto most standard mic stands too.

The Auphonix shock mount is specifically made for the Blue Yeti microphone which is a big bonus. On top of that, it weighs just 7 ounces, so it doesn’t add much bulk even if you are creating a portable setup.

You probably won’t have issues with compatibility. It is lightweight and there are sturdier mounts out there, but it is hefty and well-built enough for a Blue Yeti or Yeti Pro. If you were using a $1000 studio microphone, you may go for a more expensive and robust mount, but for the price outlay, this is a very good option.

Many Blue Yeti mic stands will be advertised as coming with – or having room for, a pop filter. We’ve covered pop filters for this microphone in detail on the site. Most will easily clip onto a boom arm or mic stand and can add an extra level of professionalism to your sound. They reduce plosives, which can make a “popping” sound on your recordings, something you really don’t want.

Unsure about pop filters? This awesome video shows the difference they can make.

Many of us have different needs when it comes to microphones. A lot of the people using the Blue Yeti are recording at home, and having a stand such as the boom arms mentioned above will make life so much easier, and can make for better recordings in the long run, whether you are a budding podcaster or experienced vocalist.

If you have any other thoughts or experiences with mic stands suited for Blue microphones, drop us a comment.