There was a time when to record anything to a high standard you needed a lot of equipment, or even the time and money to go into a recording studio. In the modern day and age, the top USB microphones provide audio recordings of extremely high quality. USB technology has made so many different types of technology easier than ever before, and mics are no exception.

The Microphone technology used to need to be put through a mixing desk or other recording studio device to boost the signal to be loud enough to be recorded. These would also need to provide power for certain mics called condenser microphones to work. Nowadays, all of this has been built into the USB technology. You can still record in the traditional way, but it isn’t the most convenient, and USB mics are often as simple as ‘plug and play’.

What Are USB Microphones Used For?

There a lot of uses, and the growth of technology continues to create more and more. We’ve listed below some of the most common uses.

So why do we opt for these over the ‘old school’ setup? What are the advantages of using a USB model of recording device?

It is important to be 100% honest. A microphone that has cost $5,000 being put through a mixing desk that has cost another $2,000 is likely to be better than a USB model. The technology has come a long way, but has not overtaken the industry standard mics used in the world’s top recording studios. That doesn’t mean they don’t do a good job though, and microphones made by manufacturers such as Blue Mics have started to more regularly find their recordings being used in commercially released songs, there are albums recorded exclusively USB that sound great, and if you don’t have access to a studio then these are for you.

Time for the reviews. We’ve put together some of our favorite products in this space, all of which provide a lot of clarity and are simple to use. They each have their own unique set of features and abilities and some will be better for some uses than others. They each have their unique strengths which we have tried to outline. 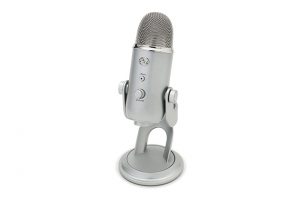 Blue Microphones are real trailblazers in the world of USB. They have a huge range of mics and accessories but arguably the best product from their brand is the Yeti. This is without a doubt one of the top-selling mics on the market, and with good reason.

It offers four different recording patterns, cardioid, bidirectional, omnidirectional & stereo, this means that there are options. If you’re recording a conversation between a lot of people you can put the mic in the middle and set it to omnidirectional if you’re recording a guitar you can set it to a cardioid pickup pattern. This may seem hard to get your head around if you’re a beginner, but it isn’t difficult and a quick look at the manual and play with the settings will show you the benefits.

As well as this, the Yeti comes with gain control, something that isn’t found on all USB mics but is really helpful. It controls how much the sound is boosted as it comes into the mic, for something quieter the gain can be boosted to ensure you get a clear recording, if you have a loud source sound you can turn the gain down.

It really is plug and play. The software we have tested it with (major recording software for both PC and Mac) has picked it up as soon as the Yeti is plugged in and turned on, just set it to the input device and you’re good to go. It couldn’t really be simpler.

The frequency response is great meaning no sounds get ‘left behind’ and it records in 16bit 48kHZ sample rate, more than good enough for most of our audio projects. The Yeti comes with its own unique and flexible stand which makes use even easier. The product comes with our top recommendation.

A quick glance at the Yeti reviews will show you a lot of what this product has been used for, and we’ve seen reports of people getting excellent recordings of both instruments and voices. This definitely stakes its claim for being the best model of USB microphone out there today, and while it is far from the cheapest, it does represent good value for money with a huge array of features and intelligent design.

We wanted to test one of the cheaper USB mics we found too and at the time of writing this product fit well within the budget. The Samson Go Mic is built for portability, and it is really pretty small. Don’t let that fool you into thinking this lacks quality though, as this isn’t a shoddy mic.

In all honesty, this is probably best used for podcasting and voice conferencing etc. rather than recording a seminal album, but if your planned use is musical then it will help you to lay down a decent demo recording. The audio clarity isn’t as good as the Yeti, but with such a good value price tag it is hardly surprising.

I’m certainly not slating the microphone. The company, Samson, have a lot of history producing microphones and know what they’re doing. This dive into the USB market has been really successful with a lot of items shifted. There is plenty to like about the design:

As we’ve alluded to, this mic might not be set to record the next hit album, but it is great for a lot of different uses such as recording podcasts, voiceovers and commentaries for gaming videos and much more. If you can afford one of the other models, I would advise that you to look for the improvement in audio clarity and the more ‘professional’ sound, but if you can’t afford to then the Samson Go mic is a good option and doesn’t fall too far behind the competitors.

So here it is. The Rode NT-USB is the closest to studio quality you’re going to get, and honestly, in a blind test I’m not sure people would be able to tell the difference. The clarity of the NT-USB is unbelievably good and it is advertised as being a studio mic.

If you want to record music, be it vocals, guitar or other instruments, this is probably the best option there is with an unbelievable level of quality. Rode have a rich history of producing microphones so it is little surprise that their USB offering is a real Rolls Royce of a recording device. So what features set the NT-USB apart?

Honestly, it is hard to see why anyone wanting a single microphone setup or a portable microphone would look at anything besides the Rode NT-USB. The first time I heard the recordings from this mic I realised how far the USB technology had come, and it is little surprise that they are advertising this as a studio mic.

Among the other reviews I’ve read, I’ve seen everyone from casual users to studio engineers singing the praises of the Rode mic, an I am happy to add my voice to its praise. This is easy to setup, easy to use, amazing quality and even has a two year warranty when you register with the manufacturer. It isn’t the cheapest, but for shear quality this has to be considered one of the best.

Okay, so this isn’t a microphone in itself. This is a converter and preamp product made by our old friends at Blue Mics (as mentioned above). Consider this a bonus review. The Icicle takes the standard output of old-school microphones such as SM58, SM57, Neumann and other mics and converts the signal ready to plug into USB. If you already have a mic that you want to use but it isn’t USB, this could be your solution. The preamp is basically an extension of the cable you’re using and it makes it an XLR to USB connection, great for those already owning a good quality microphone.

Which mic you decide is the one for you depends on so many different factors including budget, what you plan to use it on, any brand preferences you have and the spec of your computer. The above models are all good quality, and are at three very different price ranges. We’ve provided an option if you just want to mess around or do some simple recordings (the Samson Go). We’ve also looked at the range of Blue Mics, and if the Yeti isn’t the one for you, don’t forget they offer a whole range of USB microphones. If you want a simple answer to which is the best mic we’ve used, it is definitely the Rode, which has the capacity to make studio quality recordings on the go or in the comfort of your own home.

Whichever microphone you opt for, don’t forget that the environment you record in is just as important, and you need a room which is suitably quiet and has good acoustics.

So there we have it. Do you have any experiences with the microphones we’ve mentioned, or want to add your thoughts on a different product you’ve used? Feel free to leave a comment.